March turned into the craziest month thus far this year, filled with all the good, the bad and the ugly!

At the beginning of March I was home in Melbourne. The two main purposes for this trip was to get my Visa stamp in my passport and to visit the other half.

I got to see some of my friends compete for the first time, and got to catch up with a lot of people along the way. Needless to say, it was hardly the most relaxing ‘holiday’ I’ve ever had but it was so worthwhile.  Between some great days of fights, training with my trainer at home and the welcome of our new little fur baby, Honey, it was an incredible 10 days. 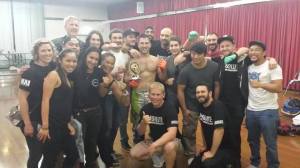 Coming back to Phuket was challenging because I was home sick all over again. It was like back in January where I was struggling and was really missing home.

Not long after I returned, I had the wonderful pleasure of cornering the amazing K.C. from Texas in her Muay Thai debut.  It was such a strange feeling being on the other side of the ring, yelling at someone, when I knew she couldn’t hear me.  It was remarkable nonetheless.  It also made me really appreciate my corner men and how much I should really try to pay attention to what they are saying to me during fights!!!

I was so ready to get back into a routine and to move past the homesickness, so I through myself into training to prepare for my next fight.

Training was tough, as per usual but I was spending a lot of time with my cardio trainer and was feeling the fittest and strongest I had ever felt. When I finally got the message that I was matched to fight I discovered I would be re matching the girl I had just lost to.

I was excited by the opportunity as I felt that we had a good fight the first time around, but that I was definitely in a position to beat her.

Going home and taking a short break was really good for me. I came back to training and a lot of things just suddenly clicked. Things I had been working on, and failing at, were finally just working. It was incredible how much I had improved from doing nothing!

Training continued and I was feeling fitter and stronger by the day. I was ready!

3 days before my fight I went to training and noticed I lacked a certain ‘pop’. My cardio had shown up, but my power had run away to an unknown land. I chalked it up to just being tired.

I continued about my day, breakfast with the ladies, and home to chill.

BAM! 2 hours later, I’m head into the toilet bowl and seeing breakfast for a second time.

I brushed it off to eating something bad and was convinced that I was ok.

A few hours later, my friend Jacqui was peeling me off my bed, shaking, fever – off to the hospital we go!

It was a terrible experience as the doctors didn’t run any tests, but the best we can assume is that I had a stomach flu of some description.

Never in my fight career have I pulled out of a fight for any reason, so given how important this fight was, it was a devastating blow. All the hard work I had been  putting in, gone to waste.

Unfortunately this had me out of action for a whole week and it’s only now that I’m getting back on my feet.

Due to Songkran (Thai New Year) it’s unlikely I will get a fight this month but I am trying.

← How can you be sad in paradise?
Perceptions… →