Fight 5 – The fight of firsts!

After what felt like a lifetime, I finally stepped back into the ring May 2nd to have my fourth fight for the year (5th fight professionally, 9th fight in total). I was scheduled to rematch Tainã Ursa Duarte March 29, however unfortunately due to a terrible stomach flu which landed me in hospital, I was forced to withdraw. I had never had to back out of a fight, no matter the circumstances and it was a feeling I don’t wish to relive. After being so sick, I had an entire week off, laid up in bed and when the time came to ask for my next fight the boss, rightly so, told me I wouldn’t fight again until May. It was a good opportunity for me to train really hard, but also enjoy a 4 day weekend over Songkran. All in all, it worked out well, despite the exhaustion in the final few days of training!

I managed to fall ill again about 2 weeks out from my fight. Funnily enough the Thai myth of “if you get rained on, you get sick” is not so much a myth. I got rained on. Trained. Napped. Woke up sick. WHY?!?!?!? I took a whole day off to try to recover but when I returned, I was struggling to breathe and my trainer sent me home as I was gasping in agony for air. On top of all of this, my usual trainer had gone away and was supposed to return but decided to not (and very typically Thai, no one really knows where he is HA HA!) so I was bounced around between many trainers over the past few weeks. It was good, to learn some different techniques and combos, but it was frustrating not being able to get into a solid rhythm. I felt like a nomad, just floating around the gym, no one to really hover over me like my usual trainer. I never thought I’d miss it! 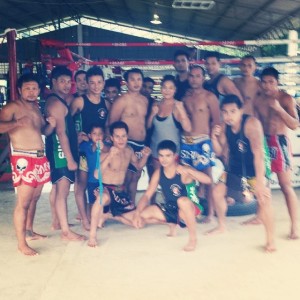 I eventually took matters into my own hands as I knew I wasn’t training as hard as I should be. I joined the boys in clinching (which here is very unusual). It worked out in my favour as Yib, one of our trainers (also one of our bigger trainers) clinched with me instead. My cold subsided for the most part, after a long stint of random over the counter medication and a 3 day course of antibiotics (Emma G! Thank you for the advice).

Fight day finally arrived and despite feeling tired, I felt prepared. When I saw the poster, it was not Tainã’s face on the poster as I had thought it was to be. When we arrived at the stadium, I came face to face with Mariah Wolfe. She was in the weight category above me (possibly two) and had more experience than me, but I was told it would be an even match which was music to my ears. When I entered the ring, I performed my first full Wai Kru Ram Muay.

For those of you who don’t know what this is, it is the “dance” which the fighters do before fights. The Wai Kru is a beautiful token which is performed to show respect for your trainer. It was particularly important for me to do this on a personal level, to show my respect to all the trainers who had trained me in my trainers absence. I won’t lie. My Wai Kru was not so beautiful, but it will be with more practice!

Round 1 starts out in the standard fashion. Testing the waters and feeling each other out. No real advice from the corner after this round and I am feeling good!

Round 2 starts and we begin to trade. Nothing she is throwing is really landing or causing damage and her main go to is the teep. I push into the clinch and find myself getting the better of her. Much to my shock and dismay, I actually started to feel my heart rate rise. My corner tells me to keep clinching – to lock quickly, control and knee. She was not well conditioned and I could hear the groans each time I kneed so it was an opportunity for a TKO. 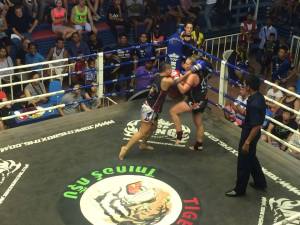 Rounds 3 and 4 continue as a clinch war. It was the first time I had an opponent who was willing to clinch and I was getting the better of her. My only major disappointment was that I threw too many jump knees and she was able to sweep my leg and take me down. Fortunately for me, I was able to get a few take downs of my own to even the score. Here was where  I also ate… my first elbow!  It was not as shocking as I had thought and I only realised after the fact that she had thrown an elbow!  I still understand the damage an elbow can do, however I’m not quite as afraid of them as I once was. My opponent was noticeably tired coming into the 3rd round so I was really trying to force the clinch to wear her down even more. 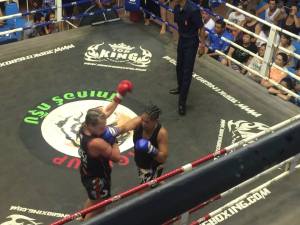 Coming into the 5th round, my corner tells me to clinch and control and the referee would probably put a stop to the fight. So I did just that. The fight didn’t get called, but I heard my corner screaming at me STOP! STOP! And making the crazy hand gestures which are supposed to signal you to stop fighting. It was the first time I have ever gotten to walk out the 5th round. Interesting concept? To just walk around the ring and let the timer go? It is.

Thai scoring is completely different to Muay Thai scoring in Western countries. The first two rounds are usually not scored, unless you have an eventful second round like mine in this fight. The reason for this is also because of the betting. Rounds 1 and 2 determine the odds for a fight and can have a dramatic impact on the people betting. Rounds 3 and 4 are the money rounds. These are the rounds where you work and win or lose the fight.

The fifth round is an interesting one. If you have won rounds 3 and 4, and you push too hard in the 5th, it can appear like you are desperate for points, therefore it looks like you think you are losing.  In addition to this, if the scorecards are neck and neck you could throw a kick, miss, get countered and lose the fight off that one point. These things alone can cost you a win. Sometimes your corner will tell you to engage and defend, but not push forward, which comes down to a similar principle. When you are told to stop fighting completely, it is because your corner believes that you have won and there is no need to continue fighting.

In Thai culture, this is almost a mercy thing. If you have already won, there is no need to go on to continue to hurt your opponent. Again, with the first concept, you also don’t want it to look like you think you have won. The instructions from the corner in the 5th round can be critical, but it can also be a risk.

My opponent was also told to stop fighting. Now, it is unclear to me as to whether or not her corner legitimately thought she had won, or whether or not they were doing it to try to win the judges (in a close fight this may happen), but you really hope your corner gets it right! I am so happy with this fight. I really feel how much I am growing as a fighter and the impact my environment is having on that. I am so grateful for all my supporters world wide, and so blessed to have this opportunity.

A massive thank you to my sponsors, Pure Energy, Absolute MMA and Elite Combat Nutrition.