Fight 20 came around quickly and saw me rematch WPMF and WWBA World Champion Farida. After an exciting first match up, the promoters at the Chalong Stadium were eager to have us back on their biggest show for the year. Naturally I welcomed the opportunity, although I would have liked a different match up in between to work on a few things. Nevertheless, the rematch was on and I was excited!

9 days before the fight, the promoters inform us that I was required to weigh in. Ordinarily weigh ins are no issue but on 9 days notice, with a weigh in on the day (which I have never done before), I had the most awful realisation. I would be fighting and weighing in on my period. I have fought on my period before but never have I attempted to cut weight at this time. It was only a few kilograms so I began my cut the same way as I usually would. After a long run in a sweat suit, the weight begun coming off and I thought I was in the clear. 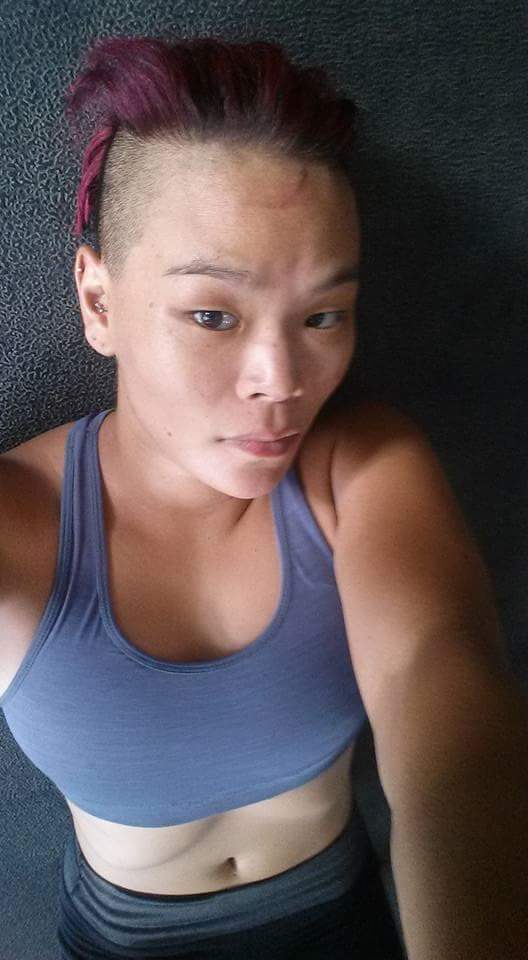 With only a kilogram to go, I headed off to the sauna. I had some great bursts in the sauna producing a lot of sweat but everytime I checked my weight on the scales, I was getting heavier. Not drastically, but heavier nonetheless. Panic set in as I was walking unchartered territory. In my dehydrated, fatigued state, I began mentally trashing myself. ‘Why didn’t I ask someone for help?’. ‘What’s wrong with me?’. ‘How could I be so stupid????’.

After admitting defeat at the sauna, I went home and chatted to the one person who I knew could help me; Caley. She explained to me how different same day weigh ins are and told me her process. Unfortunately it was too late for many of her methods but she did advise me of what more I could do.

My alarm was set for 5am in which I got up and lathered myself in boxing oil and moisturizer  (both products which help you sweat), piled on as many layers as would fit under my sweat suit and went for a run. My legs were dead, I was exhausted, and of course as we were coming into low season, it was cold.

After running for an hour, I came back and had lost no weight. I was devestated and lost. I wasn’t sure if I would be allowed to fight or not and spent most of my morning in tears. After a good, calming chat with a friend back home who is an up and coming MMA fighter, I braced myself for what was to come. I let my trainer and manager know that I had not made weight and we proceeded to the weigh ins.

I noticed that no other fighters were there as we had managed to arrive an hour early. My trainer explained to the promoters what had happened as I was curled in a ball in the grandstands, fighting off horrible cramping which had been exacerbated by the attempted weight cut and dehydration. One of the officals came over to me and asked ‘wing dai mai?’ (Can I run?). ‘Wing laew’ I wimpered,  as I explained to him that I had already run. Then the strangest thing happened. Another official walks past, gives me a thumbs up, a big smile and says ‘mai bpen rai!’ (No problem!).

Completely and utterly confused, my trainer hands me one of my water bottles and says we are going back to the gym. I wanted to wait for Farida but my trainer wanted me to come and speak with my manager.

I messaged Farida explaining what had happened and she was amazing about it. She completely understood, my situation and explained to me that the weigh in was strictly a formality. ‘Go rest up girl! We’ve got a show to put on!’. I was so grateful and in awe of her understanding and attitude that it motivated me out of my state of self loathing.

The fight night itself proved to be stressful. Because of the magnitude of the event, everyone who was anyone was there meaning the trainers got a bit caught up in catching up with old friends. We had a hard time getting our film crew in and the fight before mine was cancelled making it a rush job to get me ready. I lost all but one of my trainers and the other trainer trying to get in was being denied entry. One of the shows officials ended up wrapping my hands!

There was a lot of official business taking place before we fought. We were presented with the flowered necklaces and photographed in the ring with all the officials. I think this made me more nervous than the fight. I had never fought in front of such a packed stadium.

The fight begins and neither of us are messing around. We are exchanging strong teeps and Farida even attempts a foot sweep early in the round. I am feeling incredibly fatigued and weak and am experiencing some bad cramps so I attempted to slow the pace down a little. I know I am in for a exceptionally difficult fight.

Round 2 commences and I am slow and unresponsive. I am not defending myself well and am failing to counter. Farida continues strong until the end of the round. A big round for Farida.

As we move into round 3, I know that I need to get into the clinch if I stand any chance of getting back into the game. I start making up some ground and despite Farida’s efforts to sweep me I manage to stay on my feet. I start making some progress in the second half of the round. We are having some good exchanges but I am having a difficult time maneuvering in the large 10 oz gloves (unusually large gloves for a ladies fight).

Round 4 begins and I am on the receiving end of a barrage of knees from Farida. The only thing I can do is sweep her but unfortunately I go down with her. As we move back into the clinch I force Farida into the ropes but some bad footwork on my part allows Farida to easily get me to the ground. After a frantic exchange of knees, we are separated by the referee and it turns into a mini elbow war. My period pain is getting worse with each worn knee and you can see right near the end of the round, me hunched over slightly after being seperated in the clinch.

As we begin round 5 I know that I am losing. I had lost all my power and it is obvious I am tired and worn. Halfway through the final round my corner tells me to stop fighting as I have lost, can not win, and they don’t want me to get hurt.

I couldn’t help but bow to Farida, for another excellent performance on her behalf and her great sense of sportsmanship with the circumstances of the weigh in.

I walked out back and burst into tears. I had to lie down because my period pain was so extreme and I was so upset due to the poor performance I had put on. Yet another loss in the books, I was overwhelmed with disappointment and embarrassment. My team was so supportive of me despite the way I had felt about my performance.

Mentally I was worn from yet another loss but was ready to quit just yet!