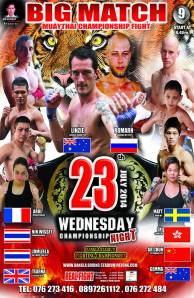 After a great win against Namwan earlier this month, I was all set to fight again – as per usual I had no idea who I was fighting until the week before.

I was disappointed to discover that I was to rematch Taina (the Brazilian girl) whom I’ve fought twice already this year, the last fight being only in May.

I realise being 1 and 1 against each other that we need to have a ‘decider’ but I was definitely hoping that this would come later in the year once we had both had the opportunity to fight and build our skills a little more. Regardless – I knew it was going to be a good fight.

On my last day of training, the boss tells us that Taina had developed an eye infection and hard to pull out and was being replaced with a famous, number 1 ranked boxer, Dao Udon, who had later switched to Muay Thai. It was a strange sensation, but I was actually happy to have a new opponent and excited to go up against someone who has good, heavy hands.

Training for this camp was good – I was unable to kick with my right leg yet again, due to sore shins from my previous fight. My switch kicks have become my power kicks as I have spent so long not being able to use my right leg that I’ve practised them a million times! 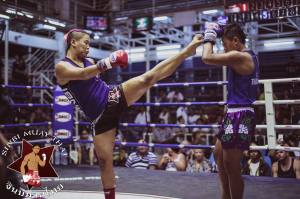 Our strategy was not much different for this fight – take it easy the first two rounds and see what she had in terms of her boxing and other skills then go in for the clinch in the final 3 rounds.

When we arrived at Bangla, I noticed that Namwan was there. She gives me a big ‘hello’! and a high five.

I continued to search for my opponent, whom I had completely over looked because at first glance, I thought it was a boy – oops!

When I finally put it all together, I realised, this girl is from Surit Thani – and Namwan is her cornerman!!! Hmmmmm….

I won’t lie – this actually made me nervous. Namwan knew what I was good at, she knew how fit I was in our fight, it was going to make this fight all the more difficult for me with someone who already had the inside scoop on me!!

We came out and touched gloves – the first thing I noticed – she was a south paw! I had never actually fought a south paw before and I also have no sparring experience against one either. This was going to be interesting!

Round 1 neither of us were in a hurry – I get the sense that Namwan had told her to save her energy for the final rounds. It was nice a technical. The first jab Dao Udon threw was like lighting – in through my gloves before I could even register what was going on. Lucky, out of basic instinct, I pulled my head back ever so slightly and lessoned the impact of her jab.

Round 2 continued on in this fashion – my corner giving me specific instructions to take it slow and through as many right kicks as I could. Unfortunately I think we were going a little too slow as this was the first time I have been reprimanded by a referee for not engaging with my opponent enough. 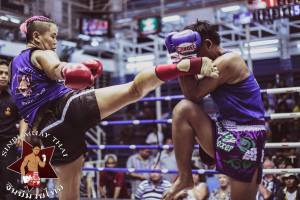 Not much advice from my corner between rounds 1 and 2 – usually a good sign – I wasn’t getting thrashed around or beaten up – they seemed happy – just wanted me to throw more right kicks. 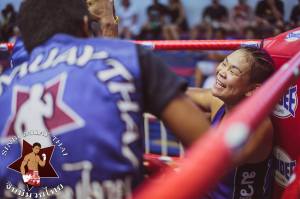 3 round begins and things are starting to warm up. It’s the first opponent I’ve had that seemed to travel at the same pace over the course of the fight. The great news – we”re trading and trading well. Things are pretty even but she’s starting to cause some damage to my left flank with her kicks. It is, by far, the hardest I have been hit or kicked. Come the end of the 3rd round, Dao Udon is winning.

I move back to my corner to find the entire Sinbi entourage there – for the first time it wasn’t overwhelming because they were all telling me the same thing – CLINCH!

The boss appears out of no where – gives me the same advice. Clinch and knee. Knee until the referee stops us. 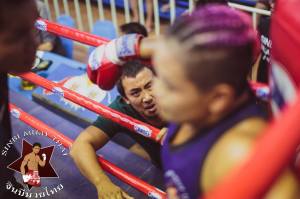 As round 4 progresses, I find that Dao Udon is willing to clinch with me. I won’t lie – she’s not particularly interested, but when I got into a clinch with her, she threw down knees with me – fortunately I was getting the better of her and she began trying to block my knees and hips forcing the referee to break us up. I score a good catch kick and take-down to move the score cards a little closer.

After the end of the fourth round, it’s clear that she is getting tired.

Round 5 – the money round – and usually my best round. The corners advice – the same as always – move forward and knee – use my ydak sai’s and don’t stop until they tell me to.

Dao Udon begins backing away from me. She is a little bit tired, and she is throwing bombs – she’s looking to get a lucky knock out. I continue to force the clinch and start getting so heavy knees in. I manage to back her into a corner where she continues to teep me away and at this point I starting throwing body shots. She’s making a noise that quickly tells me she is hurt and I continue to clinch with her.

This is the closest decision fight I have ever had – my corner seemed confident, but it was too close to really tell.

Having my hand raised at the end was priceless. Every time I go toe to toe with someone better than me, and win, the feeling is indescribable.  Dao Udon is by far one of the fittest, most skilled fighters I have fought to date. 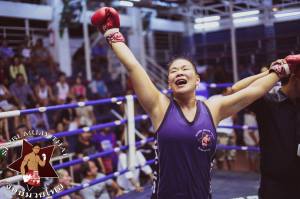 A massive thank you to my sponsors – Kombat Cafe, Pure Energy, Elite Combat Nutrition, and Absolute MMA.  Your continuous support is overwhelming and I am so grateful to you all for your contributions to my journey.

I’m here loving this life and this opportunity. Bring on the tough girls, bring on the strong girls – win on lose.

Looking forward to seeing what’s in store for me next!