After winning a third fight via knock out (blog post and video coming soon), I thought it was interesting to note the way I felt both in the ring, and prior to, compared to the past two times I have won fights via knock out.

I still remember my very first knock out win in September 2013.  It was my first professional fight – first time using elbows.  It was a bit daunting to me given that it was not something I had really trained for and I was thrown into the deep end pretty quickly.  The surprising thing – I knocked my opponent out with an elbow and broke her nose.

I won’t lie – the realisation of what had happened, didn’t really sink in until after I had my gloves taken off.  When I saw that I had won, I was over the moon.  I remember looking at my corner, seeking confirmation as to whether or not I had really just won, jumped up and down and grinned from ear to ear.  Not only had I won my first professional fight, I had won via an elbow strike!  My corner was ecstatic and so was I .  I grinned like a fool for the entire walk up the Bangla Stadium stairs.

After I had calmed down a little, one of my cornermen told me that I should go and say sorry to my opponent and to thank her for my fight.  Once I had located her, I realised, her nose was in fact bent out of shape and broken, swollen face and two black eyes.  It was pretty scary.  She was a younger Thai girl, somewhere in her late teens, and I was a little shocked that I had managed to do that.  It was, without a doubt, a completely lucky shot on my behalf.  She got in close and I threw elbows with my eyes closed, next thing I knew, she was on the ground.

I still remember celebrating, as though it was just a win and I was quite quick to dismiss the fact that I had broken this poor girls nose.  My life continued on, for the most part, unchanged from this event. 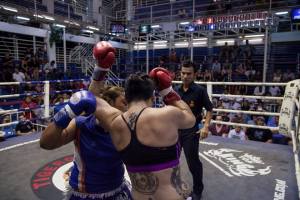 The second knock out victory in my career thus far, was very unfortunately against the same girl.  I came back to Thailand this year and ended up fighting this girl again in mid February.  I was a little frustrated to be fighting this girl again (the second time since the start of the year) but thought it might be a good measure to see if I was growing and developing as a fighter.

I’ve always had strong punches, unfortunately though, I never seemed to carry that power into the ring with me.  After some intensive training with a very technical trainer here at Sinbi, we realised, I wasn’t clenching my fists when I punched!  It seems ridiculous now, but yes, this was my fatal flaw.

I can still remember shadow boxing, and actively reminding myself to clench my fists when I punched.  I was determined to start getting that power in the ring, that I knew was there.

When the time came, I was graced with 4oz gloves.  A definite first for me, and a very daunting one at that.  I didn’t know how I’d feel getting hit with 4oz gloves.  The only time I had been hit in 4oz gloves was during MMA sparring back in Melbourne – it’s not a fond memory as the guy I was sparring didn’t exactly pull his punch…

As the second round commences, I notice that my punches are starting to bother my opponent.  I see her eyes flutter and I knew this was it, I pushed forward, landed some heavy punches, and she was out cold.

I went to head back to the ring, but my corner told me to not worry about it, that it’s part of the sport, and to be happy in my victory.

I realise, that knock outs are an ideal result in fighting, but having rendered someone unconscious with my hands, it was scary.  It’s not happened to me since, but I have resigned to the fact that it is something I may be confronted with in my future. 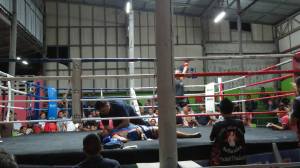 The third knock out was just a week ago.  When I had won this last fight, I was under the impression that the win was via Technical Knock Out, but it was later told to me that this one counts as a knock out (I’m open to all interpretations here as I’m still a little unsure!)

Last Sunday I rematched a girl I went 5 solid rounds with 6 months ago.  It made me a little nervous to be honest, but realised that again, it would be a good gauge to see how far I have come this year.

My opponent came out strong in the first round, throwing good combinations with her hands.  In the second round I caught her in the clinch with a knee to the solar plexus and she was unable to continue.

It was so surreal.  I think it won’t really sink in until I see the video.  I remember throwing the knee, but it didn’t feel like it had much power.  She stopped, looked at me, and crumpled to the floor.  The instant her bum hit the ground, she spat out her mouth guard and the referee called it.

This time, I was beaming!  I was so happy with the win, using a technique (ydak sai) that I have been training for a while now and encouraged to use.  There was some definite jumping, and more grinning like a fool.  I sought my opponent out and thanked my her after we had both changed and she was recovered and ok. 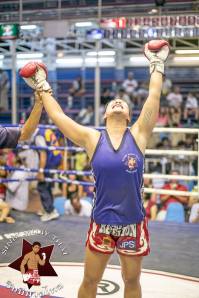 So it’s been an interesting run of knock outs for me so far.  It’s definitely something you need to learn to deal with as a fighter.  I’m personally in preference of a knock out victory like my most recent one, but have come to terms with the fact that I might have to face these things again.

Being a fighter, you know the risks you take when you step in the ring.  You know that there is a possibility that this could be the outcome.  It’s something I have had to remind myself of, because if I know it, they know it to.